The Girl From Aleppo

Nujeen’s Escape from the Hell of War 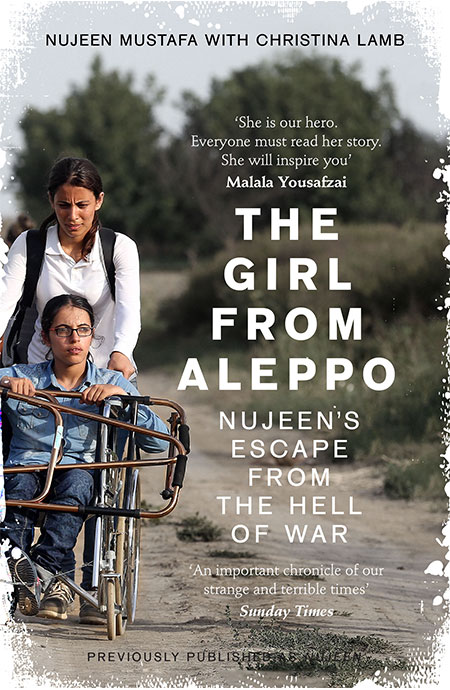 The Girl From Aleppo

Nujeen's Escape from the Hell of War

Kurdish teenager Nujeen Mustafa has cerebral palsy and cannot walk. This did not stop her dreaming of becoming an astronaut and braving inconceivable odds to travel in her wheelchair from Syria to Germany in search of a new life. Telling the story in her remarkable quirky voice, Nujeen recounts growing up through dictatorship and war and describes her harrowing journey to Europe, pushed by her sister. On the terrifying trip across the Mediterranean, she keeps calm as other passengers in the dinghy discussed tossing out the wheelchair, by listing all the Romanov emperors. Finally they reach Germany in search of safety, education and the medical treatment she needs.

Nujeen’s story has already touched millions and in this book with Christina Lamb she puts a human face on a global crisis which has seen 1 in 113 people worldwide forced to become refugees.

Trapped in a fifth floor apartment in Aleppo and unable to go to school, she taught herself to speak English by watching American soap operas. As revolution turned to civil war, Nujeen and her family fled to their native Manbij only for ISIS militants to take over. They escaped to Turkey from where they joined thousands of displaced people in a journey to Europe.

“I felt like Belle in Beauty and the Beast heading into the white unknown”, she said, referring to her favourite movie, “only in my story there were sinking boats instead of singing teacups and dancing chandeliers.”

It is the story of our times told through the incredible bravery of one remarkable girl determined to keep smiling.

Nujeen inspires me to dream without limits

I read it in twenty-four hours – without a dry eye